Yesterday, The Gospel Coalition published a post by one of their contributing writers Gaye Clark titled, “When God Sends Your White Daughter a Black Husband”. I know, I know, the title itself is enough to get one up in arms, track with me.  Prior to checking Facebook this morning I didn’t even know about the article, I probably never would have known about it if it hadn’t blown up twitter and made my Facebook friends upset, but now I had to read it. It you haven’t read the article you can do so here . Long story short, this woman’s daughter chose to marry a black man and the woman had a hard time with it, the article is a summation of a white mother’s journey to accepting/ dealing with her daughter’s not-white partner, and essentially a “how-to” for other parents who may be dealing with the same thing.

When I began reading the article my initial reaction was, “Good Lord, make it stop.” but I continued reading hoping to understand. I read right through the microaggressive language, the statements that cut through my soul and affirmed my assumptions, and the biases that plague, presumably, a lot of southern white Americans. Despite all of this at the end I felt resolve. I wasn’t angry, I wasn’t disgusted, I was fine. Probably by no strength of my own, (Thanks Jesus!). I was actually thankful. I realized that, this is kind of a big deal.

My freshman year in college I joined a Christian club on campus. I went to one of their gatherings called Dinner and Discussion. At these gatherings every person wrote down a question, put it in the hat and we would discuss it. It was cool, I was excited. Yay, conversations. Midway through the night this question happened, it was something along the lines of… “Is it a sin to marry outside of your race?” My best friend and I, the only people of color in the room looked at each other and gave each other that look. The room stiffened a bit and the girl who was leading discussion answered, I don’t remember how she started but one of the guys in the room said that his pastor and parents had always told him that marrying outside of your race was being “unequally yoked”, which Paul the Apostle, a follower of Jesus advises against in 2nd Corinthians. More than half of the room shook their heads in agreement.  For those of you who don’t know, there is a verse in the Bible, 2nd Corinthians 6:14 that talks about not being unequally yoked with unbelievers which, for the record has nothing to do with interracial marriage, that has been interpreted over the years to apply to marriage and such, gotquestions.org does a good job of explaining this here.  I was flabbergasted, favorite word, dissapointed, and slightly annoyed. I share this story with you to remind you that this woman’s article is not falling on deaf ears, and this lady isn’t crazy. There are men, women, and children in the body of Christ and everywhere probably, who believe that interracial marriage is wrong, and this woman’s article, posted on this website that reaches people who share her thought process and identity is going to make some people reconsider some things y’all!  No. The article is not by any means politically correct, it’s not culturally sensitive and it’s not helpful to me, but it will be helpful to someone, and it is truthful. And that’s what articles/blogs should be. I would rather, everyday, someone be honest with me about their opinions and experiences before hiding it behind textbook, and solely external, political correctness.

Her honest narrative, is important.

Y’all, social justice is one of the things that my heart beats most for. Inclusive spaces, phrases, communities, all of it. I like those things. They are important but learning about those things, transforming your personal narrative, all of those things take time and Gaye Clark is learning. Little by little, but her honest narrative, as she has given, as it is, at this time, is important. It’s important for her typical audience, as they just start to peel away at their personal biases, it’s important for her as she goes through her journey, and it’s important for us as through it we learn more about how our southern, elder, white, brothers and sisters truly think and we can learn how to better reach out to them instead of assuming intolerance.

If we begin to silence honest narratives, we become intolerance and exclusivity, and isn’t that the very thing we are working against? One of the concepts that we focus on a lot in communities for advancing racial justice is, believing narratives, essentially, “if I tell you my story, believe me.”  This article shows us Gaye Clarks narrative, it’s filled with her experiences and it shows us where she is at, and so it’s good, and honest. And, thankfully it’s a step in the right direction. That being said, I think that it is so important to start embracing honest narratives, if we ask everyone to hide their true opinions behind “political correctness” all it takes is a Donald Trump acting human for people to start saying what’s actually on their minds and for us to feel like we’re travelling back in time fifty years, case and point Presidential Elections, 2016. We can’t silence the narratives that make us uncomfortable either, we have to work with people who are apart of those narratives to uncover and unpack the root of those beliefs, to move forward.

If Gaye Clark ever reads this article.  Thank you for presenting your honest experiences. I’m grateful that God is revealing so many good things to you and I pray that he continues to use your daughter and son-in-law and their experiences to impact the way that you see black and brown people. I’m excited for what God is doing in your life, and i’m praying that you remain receptive to his truth’s. Blessings! 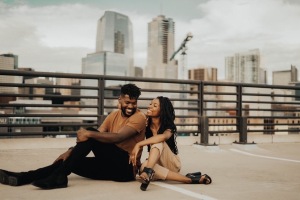 My name is Renee but I go by my middle name Jubilee. I’m a 26 year old musician from Denver. I live with my husband Jake and my namesake tomato plant. I like a lot of things and needed someplace to talk about them all. If you like all things fashion, faith, and culture you have landed smackdab in the right spot. Welcome!